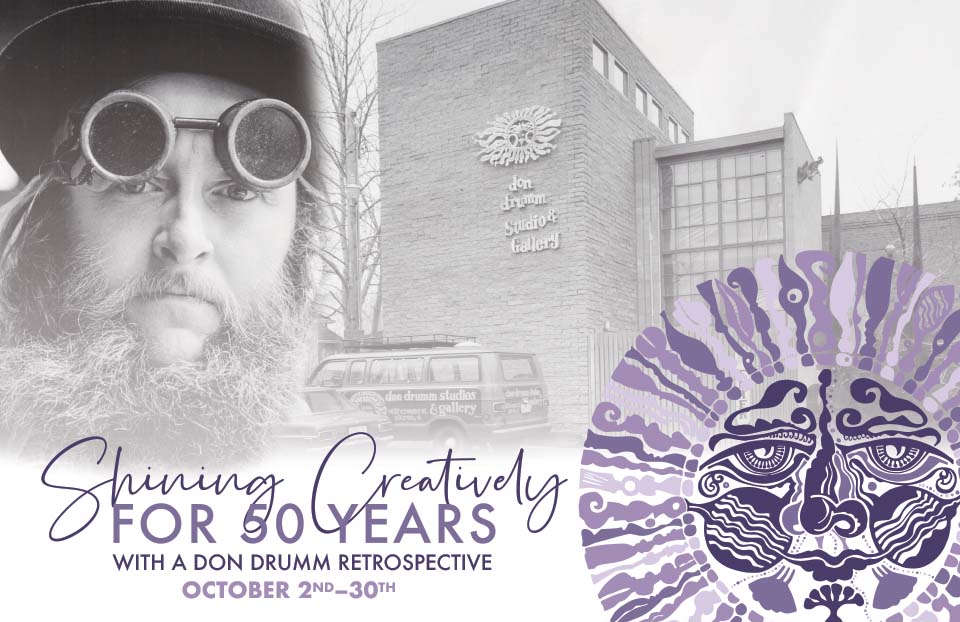 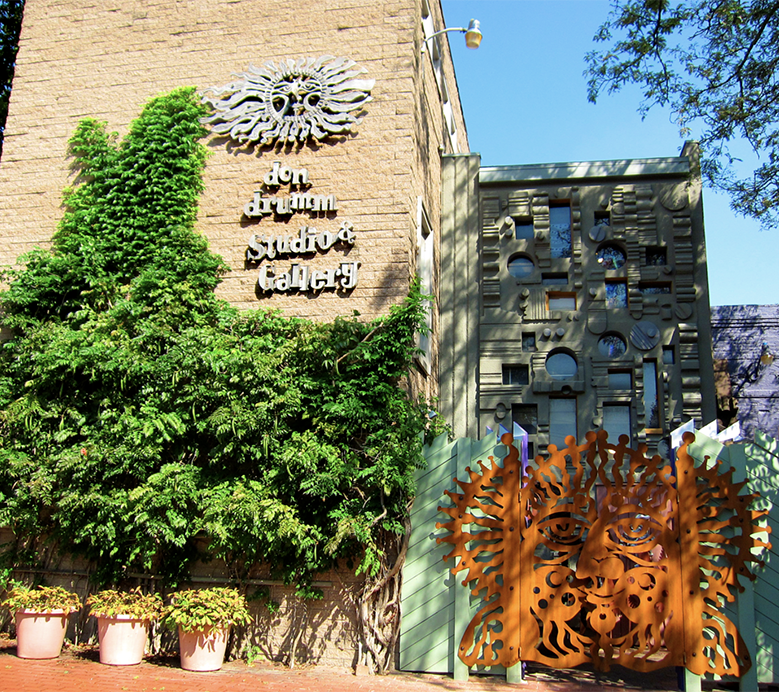 For 50 Years Don Drumm Studios & Gallery Has Been Shining Creatively

At Kent State University in the late 1950s, grad student Don Drumm dreamed of a future as a full-time working metal sculptor and gallery owner. His friends said it was farfetched, since artists usually had to work other jobs to make a living. But with his talent and the invaluable business sense of fabric artist/wife Lisa, the dream came true in 1971 – a half-century ago! 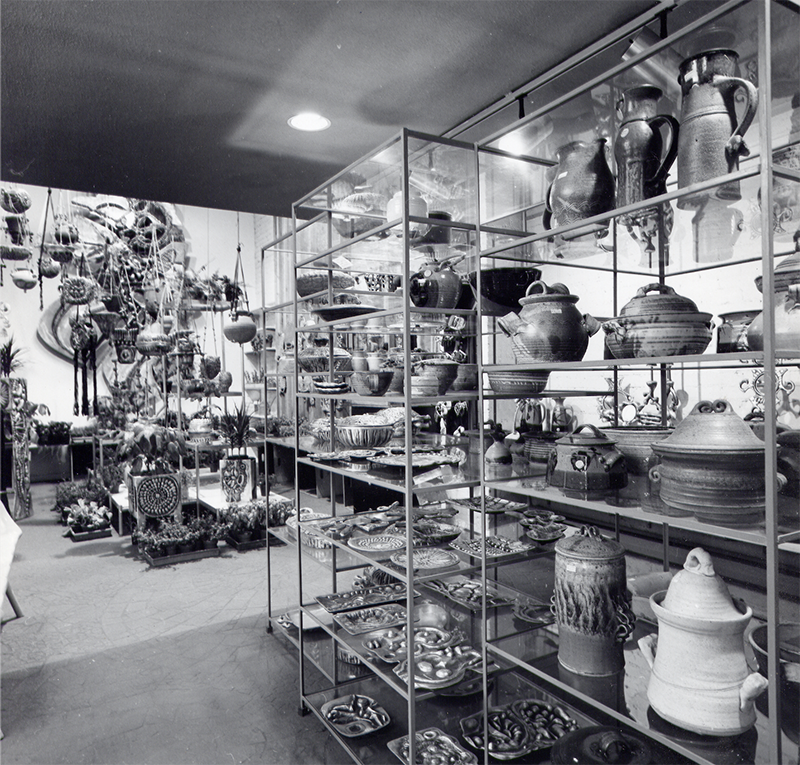 Don was a pioneer in the use of aluminum as an artistic medium.

NOT FOR SALE 10"H x 9.25"W x 12.5"D Road Runner, 1958 One of Lisa’s treasures, this welded steel piece was created in the early days before Don began working in aluminum and pewter. It is symbolic of many early works and displays his mastery of manipulating metals.

NOT FOR SALE 8.75"H x 15.75"W x 2"D Don's First Aluminum Cast, 1958 This was the first venture into casting aluminum into sand molds. Previously most metal sculpture was created by the “lost wax process,” which involves creating a model in wax, encasing it in mold material, burning out the wax and then casting the metal into the cavity. With this piece, a mold of sand was created into which the image was carved and then metal was poured into the cavity. Over the years this method has evolved for use in creating sculpture and functional items. The long history of Don working in aluminum followed.

NOT FOR SALE 14"H x 10.5"W x 3"D Don's First Horse, 1960s One of a kind copper and bronze horse. Don would often create a piece in copper. That original could then be used as the master to cast the piece in aluminum. Don then altered and manipulated those castings to create many different horse castings. Many are still available today.

Many early sculptural pieces were formed and created in copper and then surfaced with bronze.

Full-mold casting is a combo of sand & lost-foam casting. The model is burned out in the sand mold.

During the great fiber craze, Don and Lisa worked together to create combined sculptural pieces.

NOT FOR SALE 38"H x 12.5"W x 4"D One of a kind wall hanging macrame combination of Don’s aluminum and Lisa’s fiber art.

NOT FOR SALE 16”H x 14”W x 10”D Emperor Frans Joseph’s urn, 1970s This is a fun take on the extensive line of aluminum cookware that Don has created. This piece satirizes the very elaborate silver serving pieces of the past.

Don's Toys for the Kids

Don made numerous toys for his three daughters, Elisa, Tamula, and Leandra. These are just a few.

From the Drumm’s House

Below are selected pieces from Don and Lisa’s private collection.

NOT FOR SALE 53”H x 15”W x 14”D Tall aluminum lantern, 1960s This tall lantern has stood in the Drumm’s foyer for many years. It uses various forms seen in pieces Don has created.

NOT FOR SALE 15.75”H x 10”W x 1.5”D 16.5”H x 10.25”W x 1.5”D Aluminum Masks, 1985 The Akron Art Museum used to hold a masked ball every year as a fundraiser. It was always a grand affair with the creativity of the Akron art community on display. In 1985, Don and Lisa attended the ball with Landon and Cynthia Knight, and Don created four of these masks as a costume. The two masks pictured were Don & Lisa’s.

NOT FOR SALE 11/4/4 Bronze goblet, 1958-1960 One of Don’s many experiments. This goblet was created in a traditional lost wax casting technique, which is not a normal casting method Don used.

NOT FOR SALE 14”H x 14.5”W x 4.5”D One of a kind movable winged pewter bird, 2020 A gift Don created in pewter for Lisa’s birthday. The wings move into different positions, making it a unique piece.

$11,200 (Call the Gallery to Purchase) 58”H x 23”W x 4”D Aluminum back with pewter tiles, 1990s Don created over 400 tiles, initially based on the early Christian use of pictographs to communicate with those who could not read and write. These tiles led to the creation of memorials for several friends who had passed away. Eventually, he created more designs, including abstracts, sea shells, natural objects, quotes, etc. The tiles were then incorporated into a large variety of pieces both large and small.

A collection of Don’s work is kept at Drumm West, one of several buildings on the Drumm campus.

$1,600 (Call the Gallery to Purchase) 16.5”H x 14”W x 6”D Acrobats & horse aluminum, 1980s This was one piece from a series Don created using horses and figures in various ways. Many of the pieces were centered around a circus theme with acrobats.

NOT FOR SALE 16.5"H x 3"W x 3"D Aluminum candle holder set, 1958-60 This is a piece from a collection Don created while working with industrial designers Smith, Schere and McDermott. They were later marketed through Raymor, a national marketing firm.

$4,000 (Call the Gallery to Purchase) 33”H x 28”W x 12”D Praying mantis aluminum, 1970s A limited edition piece that required smaller castings that were welded together to create the larger piece. The praying mantis is one in a series of oversized insects created by Don.

The following mirrors are also housed in Drumm West. 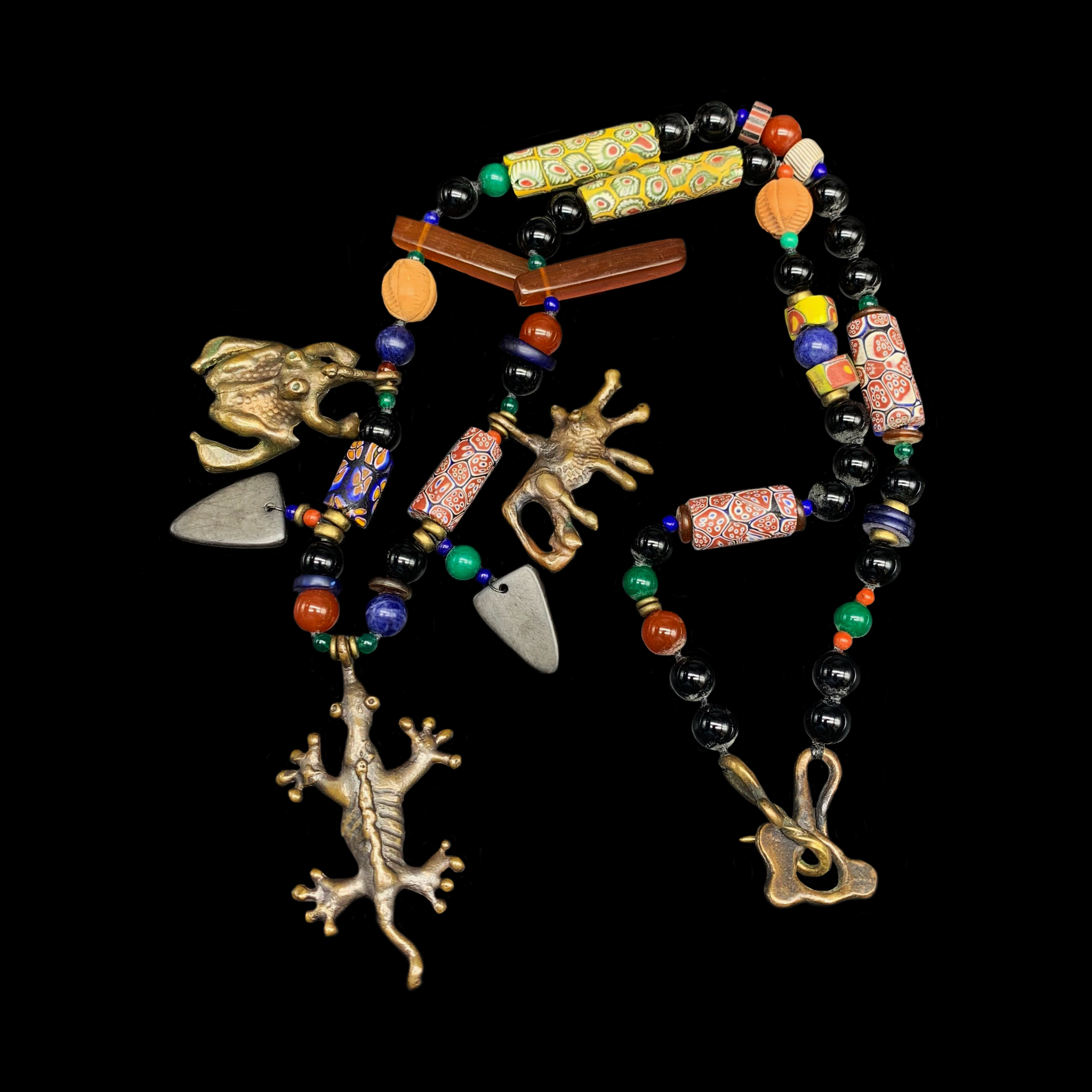 In his downtime, Don played around in jewelry. Some pieces were wearable and some were just small sculptural elements. The joke is that you can always tell who are the sculptors' wives. They are the ones bent down with the weight of their jewelry. During the 1960s, large belt buckles were in vogue. Here from Lisa's collection is a grouping that shows the many forms that Don's buckles took. At the extreme end is the "bikers belt buckle" that covered the whole mid section. Not many were sold, but it was a fun creation. Today, smaller, yet still beautiful buckles are available. Don also created beads formed in copper and then surfaced in bronze. Each a masterpiece, but en masse, very heavy.

Don continues to work in pewter and aluminum. He comes into his studio daily to create new pieces.

$600 (Call the Gallery to Purchase) 21.25"H x 22"W Aluminum, 2021 The sun face on this piece was originally designed in the 1990s. For the gallery’s 50th anniversary, we have paired them with Cricket Forge aluminum backs for a limited run.

$600 (Call the Gallery to Purchase) 21.25"H x 22"W Aluminum, 2021 The sun face on this piece was originally designed in the 1990s. For the gallery’s 50th anniversary, we have paired them with Cricket Forge aluminum backs for a limited run.

$850 (Call the Gallery to Purchase) 32"H x 32"W Aluminum, 2021 The sun face on this piece was originally designed in the 1990s. For the gallery’s 50th anniversary, we have paired them with Cricket Forge aluminum backs for a limited run. 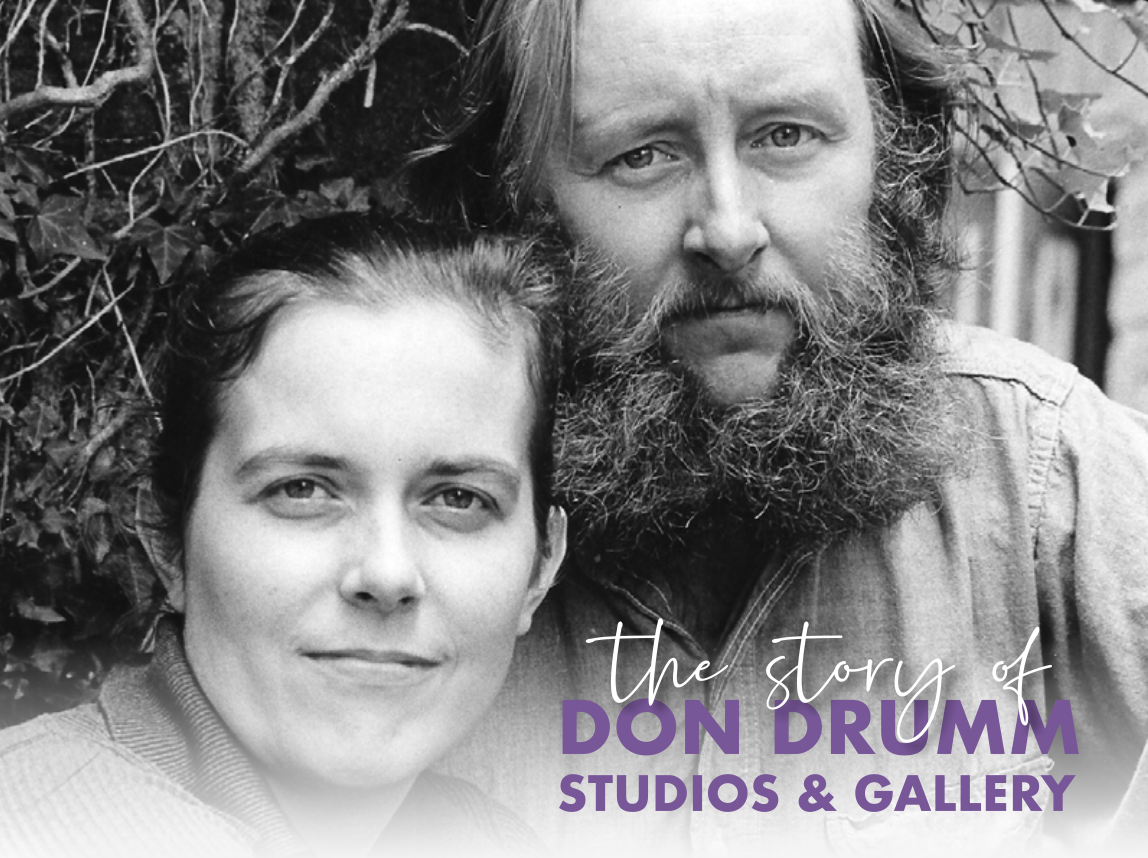 DRAWINGS AND GALLERY BOOK In celebration of our 50th anniversary, the gallery has released never-before-seen prints of Don’s drawings from years past. We have also released The Story of Don Drumm Studios & Gallery, a book highlighting the studio. These prints and the gallery book can be ordered by calling the gallery. 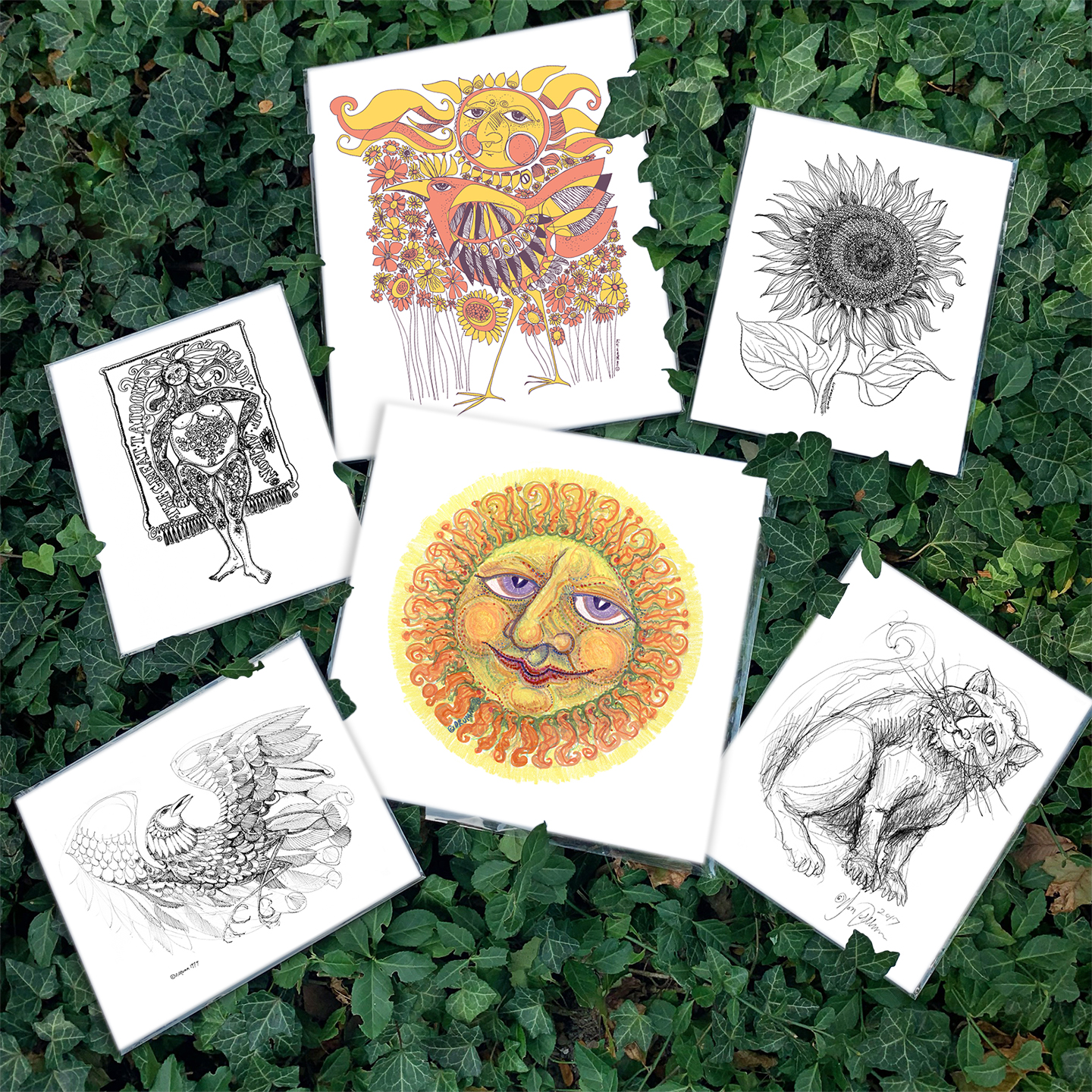 Thanks for Visitng our Online Exhibition!
If you loved this you will love our in person show even more! Come visit the gallery all month long to enjoy all of our 50th Anniversary festivities.
Like us on Facebook!